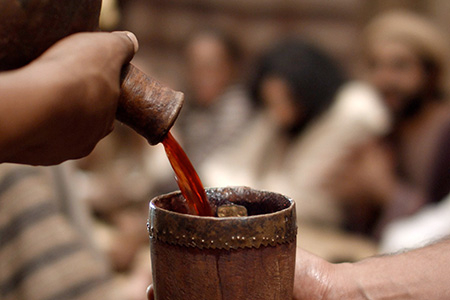 There was a wedding at Cana in Galilee. The mother of Jesus was there, and Jesus and his disciples had also been invited. When they ran out of wine, since the wine provided for the wedding was all finished, the mother of Jesus said to him, “They have no wine.” Jesus said, “Woman, why turn to me? My hour has not come yet.” His mother said to the servants, “Do whatever he tells you.” There were six stone water jars standing there, meant for the ablutions that are customary among the Jews: each could hold twenty or thirty gallons. Jesus said to the servants, “Fill the jars with water,” and they filled them to the brim. “Draw some out now,” he told them, “and take it to the steward.” They did this; they steward tasted the water and it had turned into wine. Having no idea where it came from - only the servants who had drawn the water knew - the steward called the bridegroom and said, “People generally serve the best wine first, and keep the cheaper sort till the guests have had plenty to drink; but you have kept the best wine till now.”

This was the first of the signs given by Jesus: it was given at Cana in Galilee. He let his glory be seen, and his disciples believed in him. [John 2:1-11]

Weddings are usually wonderful occasions. Family and friends come together to witness to and celebrate a couples’ love and commitment. The ritual is crowned with singing, dancing, eating and drinking. It has been so for centuries. In Jewish tradition a wedding could last for days, not hours.

It’s interesting that, in John’s Gospel, Jesus begins his ministry in the warm and homely setting of a village wedding in the same region in which Jesus had grown up. Mary, Jesus and his disciples have been invited.

Mary sees what has happened and mentions it to Jesus but he seems reluctant to do anything about it: ‘My hour,’ he says, ‘has not come yet.’

In John’s Gospel, Jesus’ hour will come on the cross, when he will reveal God as God truly is, through the sacrifice of divine love for the world.

Mary is not put off by Jesus’ reply. Perhaps she knows her Son better than he does himself at this point. ‘Do whatever he tells you,’ she says to the servants.

Even though his time had not yet come, Jesus acts with kindness and compassion, saving the couple from acute embarrassment and ensuring that the wedding celebration can continue with plenty of ‘the best wine’.

In telling this story, John is drawing on Old Testament themes which picture God as the ‘bridegroom’ of Israel. The bond of love between God and Israel was meant to be deep and enduring - like a marriage. Such themes led to the expectation that the promised Messiah would restore this relationship.

In Jewish tradition it was the bridegroom’s responsibility to provide the wine for the wedding. In John’s story it is Jesus who ends up providing an abundance of the best wine, revealing Jesus as the divine bridegroom, come to take Israel back as bride.

At the end of this Gospel passage, John tells us that Jesus’ action in turning the water into wine was the first of the signs he gave. In John’s Gospel there will be six more. All of them to do with healing, saving, restoring, feeding and giving life to human beings. None are empty displays of Jesus’ power. The ‘glory’ of Jesus lies in revealing the God of love, especially in moments of real human need. The signs show that the power of love which comes from God is always at the service of human beings.

We, too, are called to allow the glory of God to shine out through us in loving, healing, transforming words and actions.

Read our Celebrating At Home prayer and reflection here.