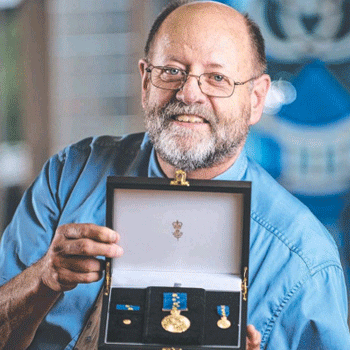 The Carmelite values of prayer, community and service attracted Sean to join the Carmelites in the United States in 1965. His years training in Washington made him a keen advocate for social justice. In his teaching in various Carmelite schools in the US, Sean involved his students in a variety of local community issues and practical ways of understanding social justice issues. He brought that love for education and social justice to Whitefriars College in 2001 when he joined the staff as Chaplain and teacher.

When the Australian Carmelites began working in Timor-Leste the same year, they found a people decimated by years of occupation and a fierce battle for independence. From just 4 Timorese Carmelites in 2001 the Order now has over 60.

When Sean first visited Timor-Leste in 2004 he was struck by the poverty of the people, especially in the rural Carmelite parish of Zumalai. “Most people don’t have electricity or running water in their homes,” he said. “They live in small, simple houses with barely enough to eat.” So the installation of solar panels and a clean water filtration plant for the town were high on his priorities. As well, Sean engaged both the Whitefriars and wider communities in fundraising for a scholarship program which has enabled many young Timorese to complete secondary school or become qualified in teaching, health care, technology and mechanics. “Many families can’t afford to pay for schooling let alone a university education for their children,” he said. “If we can provide an education for these young people, they can get a job and support their families.”

Sean’s fundraising included organising a series of concerts and an annual walk-a-thon for Timor-Leste which have raised over $300,000 since 2010.

In 2012 Sean began taking groups of Whitefriars College students to Timor to see for themselves the reality of life there. The students also helped out in Dili and in Zumalai teaching English and working alongside the local people in farming and building projects.

In 2016 Sean was awarded the OAM in the Australia Day Honours. He said he was ‘surprised and honoured and a bit embarrassed’ to receive the award for his services to the City of Manningham and his long-time involvement with the people of Timor-Leste. “I like to stay in the background,” he said. “My most valuable resource is working with wonderful and generous friends.”

Sean had previously been recognised for his services to the City of Manningham, receiving the Australia Day Citizen of the Year award in 2011.

At Whitefriars College, Sean promoted a strong community and social justice ethos among staff and students, fostering the involvement of students with local Manningham City initiatives, especially those aimed at isolated and disadvantaged people.

Sean’s gift for nurturing warm, supportive relationships drew many into his circle of friendship and made them willing partners in his various activities.

He will be greatly missed by the Carmelites, the Whitefriars College community, the people of Manningham (VIC) and Zumalai (Timor-Leste) and his many friends and colleagues.

May he rest in peace.

Funeral details will be announced when finalised.