Called to be a living Gospel 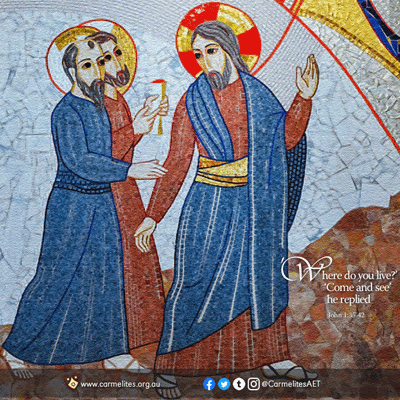 As John stood with two of his disciples, Jesus went past, and John stared hard at him and said, ‘Look, there is the lamb of God.’ Hearing this, the two disciples followed Jesus. Jesus turned round, saw them following and said, ‘What do you want?’ They answered, ‘Rabbi’ - which means Teacher - ‘where do you live?’ ‘Come and see’ he replied; so they went and saw where he lived, and stayed with him the rest of that day. It was about the tenth hour.

One of these two who became followers of Jesus after hearing what John had said was Andrew, the brother of Simon Peter. Early next morning Andrew met his brother and said to him, ‘We have found the Messiah’ - which means the Christ - and he took Simon to Jesus. Jesus looked hard at him and said, ‘You are Simon son of John; you are to be called Cephas’ - meaning Rock. (John 1:35-42)

As we return to Ordinary Time the Church begins by helping us reflect on our call to be the people of Jesus. This Sunday could very well be called ‘Vocation Sunday’. Both the first reading and the Gospel are stories of call and response.

The episode we read in the first reading is well described as ‘Samuel’s Call’. Three times he hears God calling but thinks it is Eli (a Temple priest) and goes to him. Eli finally understands that it is God calling Samuel and tells him that next time he hears the voice to say, “Speak, Lord, your servant is listening”.

The reading concludes with the thought that God was with (dwelt with) Samuel and that Samuel spoke in God’s name.

Taken together with the Gospel, it’s hard to escape the thought that this Sunday is Vocation Sunday for all disciples. Just as God calls Samuel and Eli points the way, Jesus calls Andrew and the other disciple and John the Baptist points the way. Andrew responds (follows) and goes to ‘see’ and ‘dwell with’ Jesus. Next day, he calls Peter and both go to ‘see’ and ‘dwell with’ Jesus.

Using both these readings the church returns to Ordinary Time calling us to reflect on our vocation, our call, to be disciples – to ‘come and see’ Jesus, to ‘dwell with him’ and to become evangelisers and shepherds in our own day.

Spending time in the company of Jesus (dwelling with him) we come to see who Jesus and God really are – often very different from the images we have grown up with.

Christians are called to a ‘mature’ faith in Jesus, a living relationship which is not dependant on rules, threats and fear, and is motivated only by love.

We learn to live in faithful relationship with Jesus. Eventually, we become the living ‘voice’ of Christ in our thoughts, words and actions.

It is not a passive following to which we are called. This is not about simply putting our feet in the footprints of Jesus. This is about dwelling with him, making his home ours, making our home his. It’s about making room for him in our hearts and our lives, becoming the dwelling place of God and the voice of Christ – to become a living Gospel of God’s love.

If you can't be in Church this Sunday you can download our Celebrating At Home Prayer below.