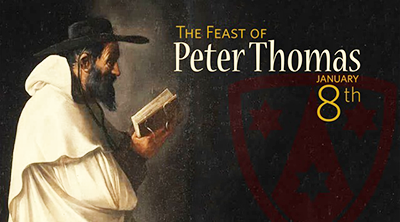 Peter Thomas was born into a poor peasant family in the southern Périgord region in France. His piety and skill as a teacher attracted the attention of the Carmelite prior of Bergérac, who invited him to join the Carmelite community there at age twenty-one. He taught in various houses of study until he was sent to University in Paris for advanced scholarship. While his studies were still in progress he was elected by the Order as its procurator general to the Papal Court at Avignon in 1345.

Peter Thomas proved to be a brilliant diplomat, all the while committed to an austere, simple and prayerful life of a Carmelite friar. He was known to have a disarming humility that enabled him to converse with peasants, soldiers and sailors just as easily as high government officials. After being made Bishop of Patti and Lipari in 1354, he was entrusted with many papal missions to promote peace and unity with the Eastern Churches. He held positions of Papal Legate for the East, Archbishop of Crete and Latin Patriarch of Constantinople, all the while working for peace and unity between churches of East and West. His work ended in 1366 when he died of a fever at Famagosta on Cyprus, where his body was then buried in the Carmelite church there.

St Peter Thomas lived as a devout Carmelite and was a diplomatic healer and reconciler, reminding us that finding common ground and bringing reconciliation are always possible with God’s help.