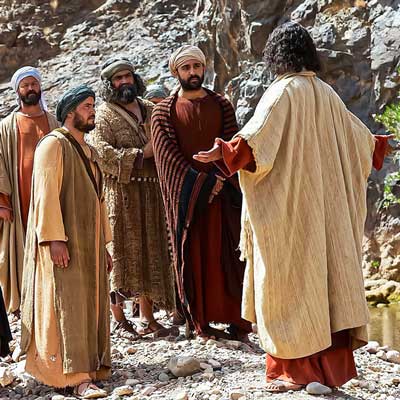 Jesus and his disciples left for the villages round Caesarea Philippi. On the way he put this question to his disciples, ‘Who do people say I am?’ And they told him. ‘John the Baptist,’ they said, ‘others Elijah; others again, one of the prophets.’ ‘But you, he asked, ‘who do you say I am?’ Peter spoke up and said to him, ‘You are the Christ.’ And he gave them strict orders not to tell anyone about him.

And he began to teach them that the Son of Man was destined to suffer grievously, to be rejected by the elders and the chief priests and the scribes, and to be put to death, and after three days to rise again; and he said all this quite openly. Then, taking him aside, Peter started to remonstrate with him. But, turning and seeing his disciples, he rebuked Peter and said to him, ‘Get behind me Satan! Because the way you think is not God’s way but man’s.’

He called the people and his disciples to him and said, ‘If anyone wants to be a follower of mine, let him renounce himself and take up his cross and follow me. For anyone who wants to save his life will lose it; but anyone who loses his life for my sake, and for the sake of the Gospel, will save it. (Mark 8:27-35)

All of us, at least to some extent, shape our identity and measure ourselves in response to the comments and ideas of others. From an early age we are taught how to speak, dress and act in order to be ‘acceptable’ to others. Usually this is a good thing, but sometimes it can go horribly wrong.

Celebrities, sports stars and young people can become so vulnerable to the expectations and reactions of the public, media and social media trolls that they end up with little identity of their own, or they develop a very distorted idea of their identity. Unfortunately, both these experiences have significant negative impacts on a person’s mental wellbeing.

This Sunday’s Gospel teaches us how to find our true identity.

Both the ‘people’ and Peter have ideas about who Jesus is. For the people he is John the Baptist, Elijah or one of the prophets returned from the dead. For Peter, Jesus is the Christ, the Messiah. But what happens next reveals that Peter and Jesus have very different ideas about who this Messiah is.

Jesus calls Peter, ‘Satan’. If Peter is to learn the true identity of Jesus and come to think with God’s heart, he must ‘get behind’ (follow) Jesus.

Such followers are called to renounce their false identity (often defined by what we have, what we work at, our delusions) and to find their true identity as God’s beloved son or daughter through a life poured out in loving service of others (taking up his/her cross).

I often think that parents are the great examples of what all this means. They constantly have to go beyond themselves, their own needs, hopes and desires and sacrifice their time, energy and money to care for their children with love. In doing so, they often discover their very best selves.

In the Gospel, Jesus, the true Messiah, appears not as a glorious God-King but as the Suffering Servant of God about whom Isaiah speaks in the first reading. The way of discipleship is not about self-glory but about true service, and about discovering our true identity as God’s beloved sons and daughters.

As disciples of Jesus we try to live our lives as a real service to our brothers and sisters in the world. But it’s not possible to do that until and unless we realise our true identity and call as God’s own people.

Then we become a source of love, mercy, hope, compassion, justice, truth, concern and Christian action as servants of God and each other. That is DOING the Gospel.