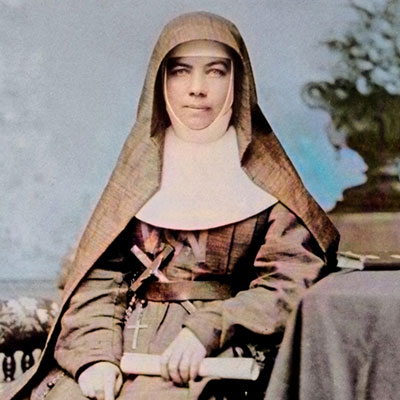 Jesus said to his disciples:
I am telling you not to worry about your life and what you are to eat, nor about your body and how you are to clothe it. Surely life means more than food, and the body more than clothing!
Look at the birds in the sky. They do not sow or reap or gather into barns; yet your heavenly Father feeds them. Are you not worth much more than they are? Can any of you, for all his worrying, add one single cubit to his span of life?

And why worry about clothing? Think of the flowers growing in the fields; they never have to work or spin; yet I assure you that not even Solomon in all his regalia was robed like one of these.

Now if that is how God clothes the grass in the field which is there today and thrown into the furnace tomorrow, will he not much more look after you, you men of little faith? So do not worry; do not say, “What are we to eat? What are we to drink? How are we to be clothed?” It is the pagans who set their hearts on all these things. Your heavenly Father knows you need them all.

Set your hearts on his kingdom first, and on his righteousness, and all these other things will be given you as well. So do not worry about tomorrow; tomorrow will take care of itself. Each day has enough trouble of its own.’ (Matthew 6:25-34)

The Gospel reading for today's celebration of Mary MacKillop centres around trust in God and a warning against becoming absorbed by or preoccupied with eating, drinking, clothing and accumulating wealth. These can easily become idols - things which stand between us and God. One cannot serve God with a divided heart. The disciple must make a positive decision to love God above all else.

The call to trust in God’s providence is rooted in the special relationship we have with God, as the sons and daughters of the heavenly Father. Ethical behaviour consists in learning the way and manner in which God loves and preserves creation.

This Gospel was chosen for today’s feast because the themes of confidence, trust and reliance on God dominated Mary’s life. She encouraged her sisters not to get lost in fretting and worrying, but to trust in God and keep working with energy and enthusiasm. Though beset by many problems and difficulties, Mary seemed always to have a quiet energy that trauma and tragedy could not overcome. 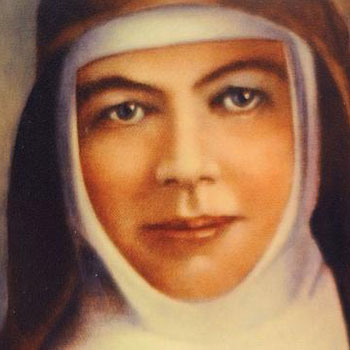 On 15 January 1842 Mary MacKillop was born of Scottish parents, Alexander MacKillop and Flora MacDonald in Fitzroy, Victoria. A plaque in the footpath now marks the place of her birth in Brunswick Street, Fitzroy. Mary, the eldest of eight children, was well educated by her father who migrated to Australia with his parents. Unfortunately, he lacked financial awareness, so the family was often without a home of their own, depending on friends and relatives and frequently separated from one another.

From the age of sixteen, Mary earned her living and greatly supported her family. In 1861 she went to work in Penola where she met Father Julian Tenison Woods who needed help in the religious education of children in the outback. At the time Mary’s family depended on her income so she was not free to follow her dream. However, in 1866, encouraged by Father Woods, Mary opened the first Saint Joseph’s School in a disused stable in Penola.

Young women came to join Mary, and so the Congregation of the Sisters of St Joseph was begun. In 1867 Mary was asked by Bishop Shiel to start a school in Adelaide. From there, the Sisters spread in groups to small outback settlements and large cities around Australia. Mary and these early Sisters, together with other Religious Orders and Lay Teachers of the time, had a profound influence on the forming of Catholic Education as we have come to know it today. She also opened Orphanages, Providences to care for the homeless and destitute both young and old, and Refuges for ex-prisoners and ex-prostitutes who wished to make a fresh start in life.

Throughout her life, Mary met with opposition from people both outside the Church and from within it. In the most difficult of times she consistently refused to attack those who wrongly accused her and undermined her work, but continued in the way she believed God was calling her and was always ready to forgive those who wronged her.

Throughout her life Mary suffered ill health. She died on 8 August 1909 in the convent in Mount Street, North Sydney where her tomb is now enshrined.

This great Australian woman inspired great dedication to God’s work in the then new colonies. She stands as an example of great courage and trust in her living out of God’s loving and compassionate care of those in need.