History of the Carmelite Order 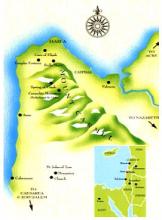 The Order of Carmelites has its origins on Mount Carmel, in Palestine, where, as we read in the first Book of Kings, the great prophet Elijah defended the true faith in the God of Israel, when he won the challenge against the priests of Baal. It was also on Mount Carmel that the same prophet, praying in solitude, saw the small cloud which brought life-giving rain after the long drought. From time immemorial, this mountain has been considered the lush garden of Palestine and symbol of fertility and beauty. Indeed, "Karmel" means "garden".

In the 12th century (perhaps after the third crusade, 1189-1191), some pilgrims who had come from Europe, came together near the "spring of Elijah", in one of the narrow valleys of Mount Carmel, to live out their Christianity as hermits after the example of the prophet Elijah in the very land of our Lord Jesus Christ. Then and in later times, the Carmelites did not acknowledge anyone in particular as their founder, but remained faithful followers of Elijah who was associated with Mount Carmel through biblical events and through Greek and Latin patristic tradition which saw in the prophet one of the founders of the monastic life. In the middle of the cells they built a chapel which they dedicated to Mary, Mother of Jesus, thus developing a sense of belonging to Our Lady as Patroness, and they became known by her name as "Brothers of Saint Mary of Mount Carmel". Thus Carmel is deeply associated with Elijah and Mary. From Elijah the Carmelites inherited a burning passion for the living and true God and the desire to make His Word intimately their own in order to witness to Its presence in the world; with Mary, the Mother of God, they are committed to live "in the footsteps of Jesus Christ" with the same intimate and deep feelings which were Mary's.

In order to have some juridical stability, this group of lay hermits turned to the Patriarch of Jerusalem, Albert Avogadro (1150-1214), who was then living at St John of Acre near Mount Carmel. Between 1206-1214, Albert wrote for them a formula of life. Successive approvals of this formula of life by various Popes helped the process of transforming the group into a Religious Order, a fact which took place at the time of the definitive approval of the text as a Rule by Innocent IV in 1247. Thus the Carmelite Order took its place alongside the Mendicant Orders.

However, about 1235, the Carmelites were forced to abandon their place of origin due to the incursions and persecutions of the Saracens who were reconquering the Holy Land from the crusaders. Most of them went back to their country of origin in Europe.

Soon they increased and flourished in the sciences and in holiness. Later some women attached themselves to the monasteries of the friars and in 1452 became cloistered nuns living in their own communities.

In the 15-16th centuries there was some relaxation of discipline in various communities, a fact greatly opposed by Priors General such as Blessed John Soreth (+1471), Nicholas Audet (+1562) and John Baptist Rossi (+1578), and by some reforms (among others those of Mantua and Monte Oliveti in Italy and of Albi in France) to put a stop to the spread of the abuses and the mitigations. The most famous reform is certainly the one started in Spain by St Teresa of Jesus for the reform of the nuns and then, helped by St John of the Cross and Fr Girolamo Gracian, for the reform of the friars. The most relevant aspect of this reform of Teresa is not so much that she opposed the mitigations introduced in the life of Carmel, but rather her ability to integrate in her project, vital and ecclesial elements of her time. In 1592 this reform, called that of the "Discalced Carmelites" or of the "Teresians", became independent from the Carmelite Order and grew rapidly in the congregations of Spain and Italy which were then united in 1875. Thus there are two Orders of Carmelites: "The Carmelites", also known as of the "Ancient Observance" or "Calced", and "The Discalced Carmelites" or "Teresians" who consider St Teresa of Jesus their reformer and foundress.

In spite of this division, during the following centuries the Carmelite Order continued its spiritual journey. Many illustrious men and women gave new spirit to Carmel with their own spirituality and genius. There was also significant development among the laity with the institution of the Carmelite Third Order and the Confraternities of the Scapular of Our Lady of Mt Carmel throughout the world. With the Reforms of Touraine in France, and of Monte Santo, Santa Maria della Vita, Piedmont, and Santa Maria della Scala in Italy, in the XVII and XVIII centuries the movement for a stricter observance spread everywhere.

At the dawn of the French Revolution, the Carmelite Order was established throughout the world with 54 Provinces and 13,000 religious. But as a result of the French Revolution the Order suffered great losses, such that at the end of the 19th century it was reduced to 8 Provinces and 727 religious. But it was this small band of religious who during the 20th century, with determination and courage, re-established the Order in places where it had been and also planted the Order on new continents.

Since the time of the Second Vatican Council (1962 - 1965), Carmelites have reflected at length on their identity, on their charism, on what is fundamental in their lives and what is for them a "life-project", namely "to live a life of allegiance to Jesus Christ and serve him faithfully with a pure heart and a good conscience" (Rule). They found their allegiance to Christ in their commitment to seek the face of the living God (contemplative dimension), in living in fraternity and service (diakonia) in the midst of the people. They see all this in the lives of the prophet Elijah and the Blessed Virgin Mary who were led by the Spirit of God. Looking at Mary and Elijah, it is easy for the Carmelites to understand, to interiorise, to live and to announce the truth that makes a person free.

Carmelites, conscious of being part of the Church and of history, live in a fraternity that is open to God and to people, able to listen and give an authentic response to the evangelical life according to their own charism, and they commit themselves to build the Kingdom of God wherever they are. Indeed they are committed to evangelisation in houses of prayer, centres for spiritual exercises, parishes, Marian sanctuaries, schools, religious associations; and to Justice and Peace wherever human dignity is trodden underfoot, especially among the poor, the marginalised, the suffering. 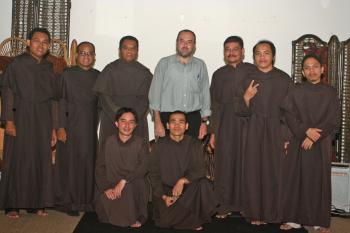 To this vast and varied challenge of the Carmelite friars, one will find in close collaboration: communities of cloistered nuns, Congregations of sisters, Consecrated Lay people, numerous groups of Third Order Lay members and Confraternities of the Scapular of Our Lady of Mt. Carmel. All these groups, born of the Spirit throughout the centuries, and inspired by the Carmelite Rule are intimately united by the bond of love, of spirituality and of the communion of spiritual goods. They constitute the Carmelite Family in the Church. At present the Carmelite Order (the friars) is formed of Provinces, General Commissariats, General Delegations, Hermetical Communities and an Affiliated Community with a total of about 2,000 religious. They are found in all the continents.