History of the Province

30 October 1802 – Lay Carmelites James Dempsey and John Butler arrive in Sydney aboard the Atlas having been transported for life for their alleged involvement in the Irish Rebellion of 1798. Butler died on April 4, 1836 and Dempsey on February 10, 1838.

7 May 1824 – Father Samuel Coote, an Irish Carmelite, arrived in Hobart aboard the Ardent to minister among the Catholics of Van Diemen's Land. He was only the fourth priest to come free to work in Australia, but left the colony for England in December 1825 and died in London on September 18, 1837. 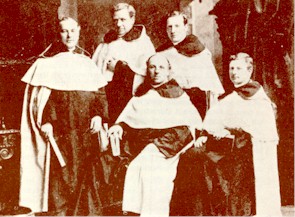 16 April 1881 – Irish Carmelites Joseph Butler, Ignatius Carr, Patrick Shaffrey, Brocard Leybourne and Hilarion Byrne (pictured right) arrive in Port Adelaide aboard the SS Liguria to begin the Australian Mission. It was Holy Saturday that year and the Prior of the Mission, Joseph Butler, continued on to Gawler the same day to celebrate his first Mass in Australia on Easter Sunday.

7 May 1882 – Carmelites celebrate their first Mass in St Joseph's Church, Port Melbourne, Fathers Butler and Shaffrey having accepted charge of the newly-formed parish of Sandridge.

1909 – Division of Sandridge parish into the parishes of Port Melbourne and Middle Park and establishment of separate priories.

1947 – Foundation of the Lay Carmelites in Australia by Father E.J. Nugent.

1956 – Frs William Morganti and Robert Dowd together with Br George Parsons went to Southern Rhodesia (now Zimbabwe) to join the Carmelite mission which had been established by the Irish Province in 1946. The Province’s involvement continued until 1961.

1956 - Foundations at Hilton and Wentworthville. Foundation in Hilton closed on 31 January 2005.

1973 - At the invitation of the Indonesian Province, the Australian Province took over the mission in Sumbul in North Sumatra in March 1973 and continued to have responsibility for it until 1982. In that year Fr Anthony Scerri, who had been parish priest in Sumbul, became vice rector of the new St Thomas’ University in Medan and remained there until September 1995 when he became a general councillor. The Australian mission in Indonesia ceased at that date.

1977 – Foundation of the House of Prayer at Vermont which moved in 1978 to Warburton, and of the Whitefriars College community firstly at East Doncaster, then at McGowans Road, Donvale in 1978 and finally at Merinda, Donvale in 1979.

16 August 2001 – The Australian Carmelites accept responsibility for the Carmelite Presence in Timor-Leste and for the Mission Parish of Zumalai.

2 August 2004 - Foundation of the first Timor-Leste Novitiate at Fatuhada, Dili.

22 January 2005 - Reunification of the parishes of St Joseph, Port Melbourne and Our Lady of Mount Carmel, Middle Park as one parish.